As Trek’s aerodynamicist, I often get asked by amateur riders how much cycling aerodynamics really matters to them. It’s a fair question. At the elite level, races are won and lost by fractions of a second. For a pro, this can be the difference between a career-defining moment of glory and just another day on the job.

But that’s not really the case at your weekly club ride, is it? Still, aerodynamics matters. As a certified non-pro myself, I did some calculations to quantify the kind of gains someone like me could see with a few choice aerodynamic upgrades. Let’s dive in:

“Does an aero bike still help me if I can’t ride as fast as the pros?”

Short answer: yes. The slower you ride, the longer it takes you to complete a course. That means you have more time for aerodynamic savings to compound, even though a smaller percentage of your pedaling power is working to overcome aerodynamics.

Additionally, the benefit of an aero bike is often larger in a crosswind from the propulsive “sailing effect”—the slower you ride, the more crosswinds will affect your aerodynamics.

Science lessons aside, let’s break down how those concepts work in the real world. Like many riders across the country, I am far from the fastest cyclist at Trek, but I was still curious how much time I could save with a new aero bike like Madone versus a traditional round-tubed bike like the old Trek 1.1 I’ve owned since I started at the company. 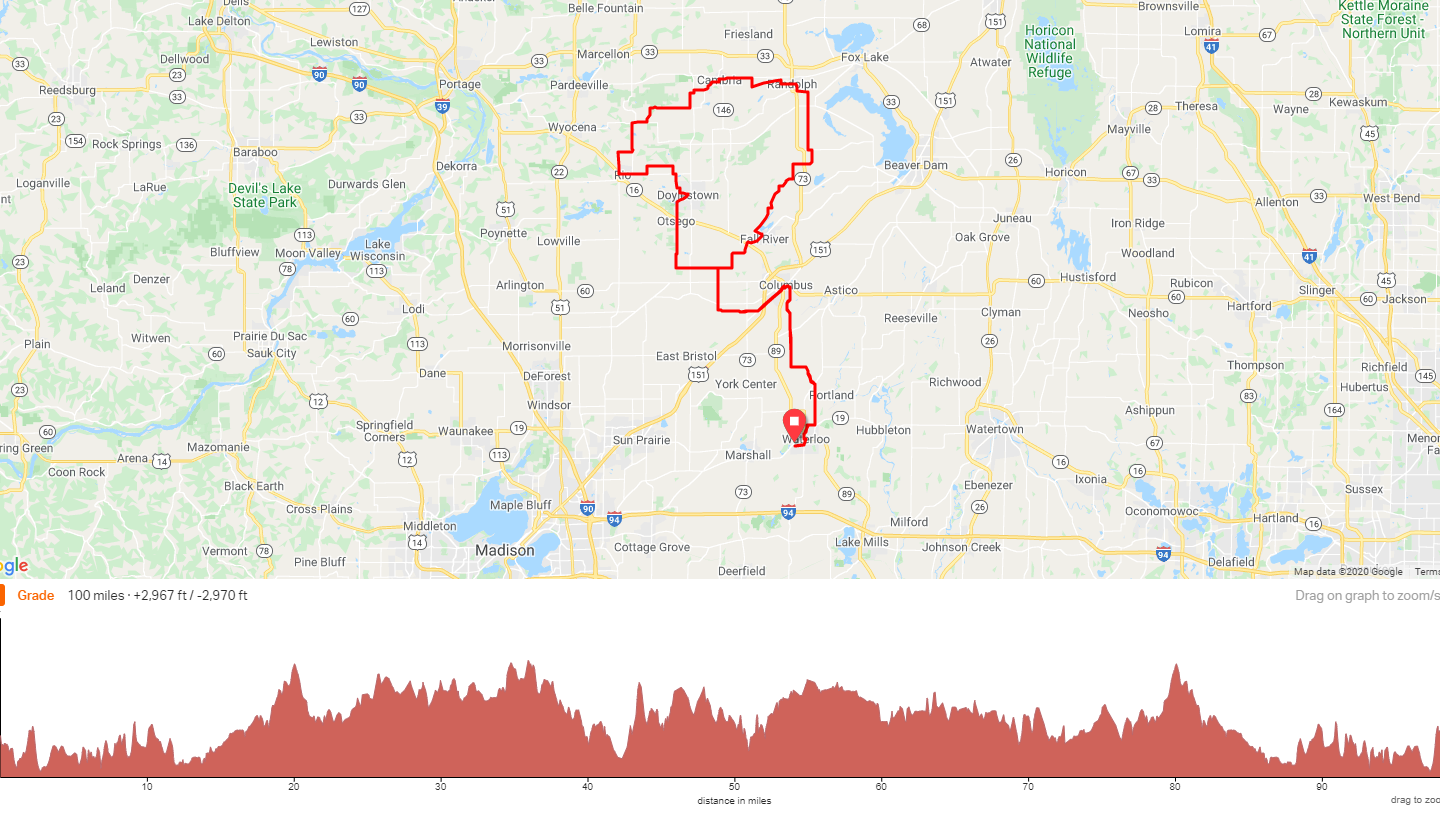 I ran simulations of the planned Trek 100 course with two bike options: one with round tube shapes and one with aggressive aero shaping. I assumed identical wheels, no weight change between the two bikes and rider, and minimal drafting. To account for varying fitness levels, I ran simulations for an average rider power of 110 Watts (approximately 16 mph) to 300 Watts (approximately 24 mph). Lastly, I ran the simulations with two levels of wind: no wind and a 7 mph average wind. 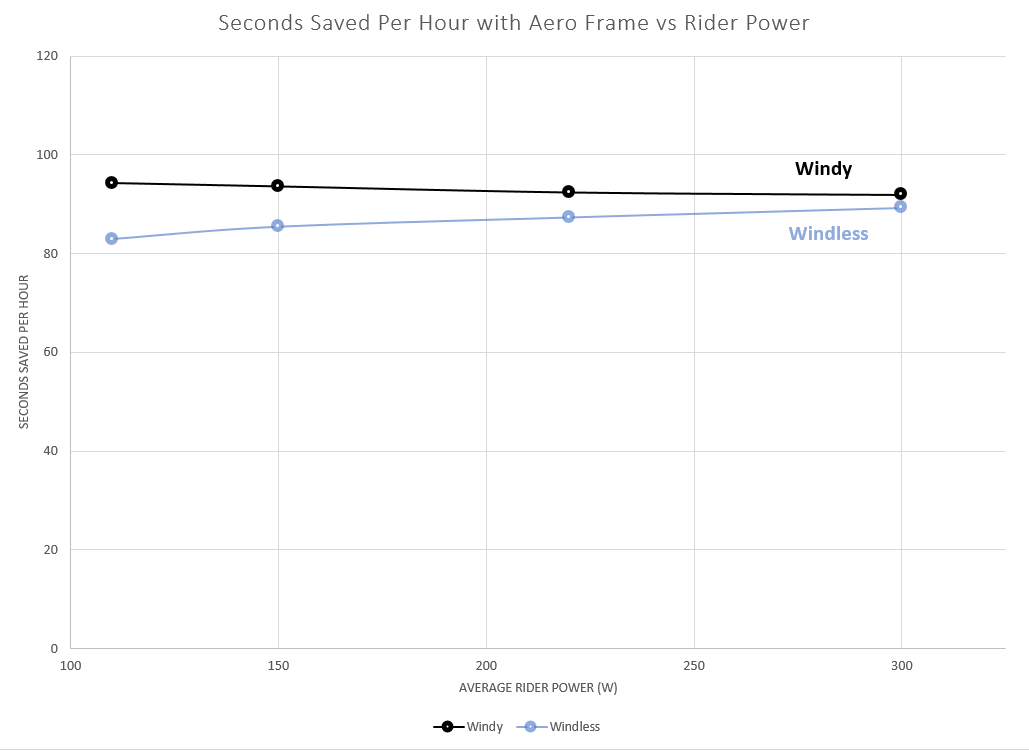 In the first graph, it’s clear that the slower the rider, the more absolute time they save. This is because their total ride time is longer, which gives them more time to compound aero savings.

The second graph shows how many seconds a rider saves with an aero bike over every hour they would’ve ridden with a non-aero bike. These results are pretty constant—regardless of how fast you ride, the percentage of savings stays steady.

When it’s a calm, windless day, aerodynamic gains (calculated as seconds per hour) increase with rider speed because aerodynamics make up a larger portion of the force a rider needs to overcome. But when you take wind into account, the opposite occurs: the seconds per hour improvement increases the slower a rider is moving. This is because the wind increases the amount of time a slower rider will spend in a crosswind, making an aero bike’s benefits even stronger.

With those results in mind, let’s adjust our original question a bit: will an aero bike make a rider like me fast enough to compete with my Cat 1 coworkers? No. But it certainly helps. And if I’m going to replace my old Trek 1.1, I might as well replace it with something that’s going to make me about 2.5% faster!

Think about it like this: if I ride 5,000 miles in a year with my old bike, that 2.5% aero-bike difference would allow me to ride 125 more miles in the same amount of time.

“Doesn’t drafting make an aero bike useless? And what about weight?”

Drafting is a great tactic to shave seconds off your personal best on rides of any distance. When you’re riding close behind another rider, drag forces can be 30-50% lower than when you’re riding alone. But does that nullify the advantage you’ve picked up with your new aero bike?

Nope! We’ve run drafting studies for the Trek pro team in the velodrome, the wind tunnel, with computational fluid dynamics, and on the road—and the results show that an aero bike retains most of its advantage even in a rider’s slipstream.

In a race or on a more casual ride, you’ll probably spend some time drafting and some time out in the open. To isolate the drafting effect, though, let’s assume that you’re a perfect wheelsucker and you’re maximizing 40% drag reductions throughout the entire Trek 100. You can now ride faster, but drag still matters.

With an aero bike, you’ll simply be able to go faster than you would with a non-aero bike. The 150-Watt rider riding during a windy day now finishes 6.5 minutes faster on an aero bike (8.4 minutes with no drafting) and is 83.3 seconds per hour faster (93.6 seconds with no drafting). So, drafting the entire Trek 100 does slightly reduce an aero bike’s advantage, but the aerodynamics still provide a significant boost.

And just how important is weight in this equation? Even if the 150-Watt rider added 1.5 kg to their combined weight in their switch from a non-aero to an aero bike, they’d still see a 7.6 minute improvement with no drafting. A lighter bike is certainly faster than a heavier one, but on a course like the Trek 100 (annual charity ride in waterloo, USA), which doesn’t have any massive climbs, it’s optimal to go with an aero bike, even if it adds a bit of weight.

The new Émonda RSL bar/stem in the wind tunnel

“Why do you wind tunnel test at such high speeds?”

Why 30 mph? Well, it’s the standard in the cycling industry. Testing with the same methods repeatedly gives consistency to our aerodynamics claims and allows our customers to compare our products to others on the market that are tested the same way.

Of course, we do test prototypes at a range of speeds to make sure the drag coefficient changes as we expect. So, though we typically present our aerodynamic findings at the 30 mph standard, we can also apply our findings to speeds most riders can sustain. And if that’s 30 mph, congrats!

Here’s the bottom line: even if you’re not a pro, aerodynamics matters. An aero bike can help you ride farther, faster, and a combination of the two. The more you’re on your bike, the happier we are—and the happier you’ll be, too.

Madone is in a class of its own. It’s fast, light, smooth and designed to give you every advantage in speed and handling. Of the world’s most sophisticated road bikes, only Madone delivers the triple threat of advanced aerodynamics, superior ride quality and unprecedented integration.
VIEW THE BIKE 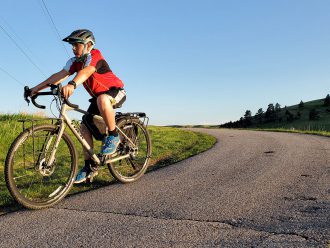 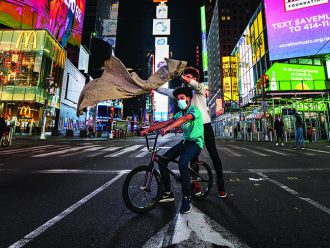 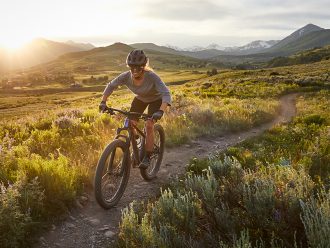